The following week driving through Canonbury Square in North London, I saw an image of Andrew Kerr in my windscreen superimposed on a phone box on the pavement. As we had exchanged phone numbers I pulled over and called him.
“Hello Bill we have the farm and are planning to move down at the end of the week, come over”. I did and we talked for hours. Andrew, James, Tony, Thomas and a number of other souls discussed what they hoped the proposed festival could achieve - it would be free, without steel fences and everyone should come and do their thing.
I said that I could borrow a 7 ton van and that I would move Andrew's possessions down to Worthy farm at the weekend.

On the Wednesday of that week I woke having had an unusual dream. I was standing to the rear of an open-air stage next to a drum riser, looking towards the audience that someone was addressing.
There were two beams of light forming a pyramid in the sky with some buildings on the horizon. It was my habit to note my dreams at the time and inspired by the conversations with Andrew’s tribe, I took the morning off work and started in the studio with the notes and the rough sketch.
The pyramidal form suggested by the light beams gave me a start point. I made a preliminary sketch of how it might work as a performance space and thinking it seemed like a good idea, I made a cardboard Pyramid Stage model. 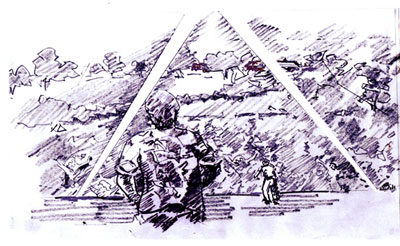