Back to the drawing board

Andrew phoned John Michell who had recently published ‘The View over Atlantis’ (which I had already read and found interesting). He was at work on the sequel ‘The City of Revelation’ and suggested that the stage should be based on "The dimensions found in Stonehenge".

Buying the largest scale plan of Stonehenge I could find and OS maps of Wiltshire and Somerset. I go back to my studio, tape the OS maps down to my drawing board and set to work with dividers and scale rule. Using Alfred Watkin's Ley Hunter's Manual, I confirmed that the Glastonbury Abbey Stonehenge Ley line bisects Worthy Farm. Andrew is most pleased.

Now to design a working stage with a bit of magic, including the suggestion that I base it on ”The dimensions found in Stonehenge”. This was a lot more difficult get my head round than Ley lines.

To get a better understanding of the task in hand James offered to arrange an introduction to the Chief Druid Thomas Lackenby Maughan, who suggested that I study with him Dr. John Dee’s theorems in his work ‘The Hieroglyphic Monad.’

All the information I could find on Stonehenge was two-dimensional. The stage needed to be three-dimensional, so the Chief Druid suggestion that I study John Dee’s 'Monad' was very useful when it came to the volumes within the stage and projecting its elevations. 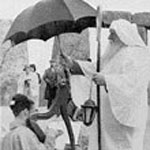 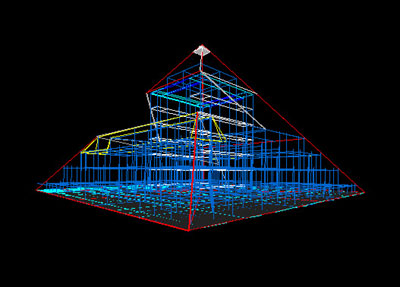 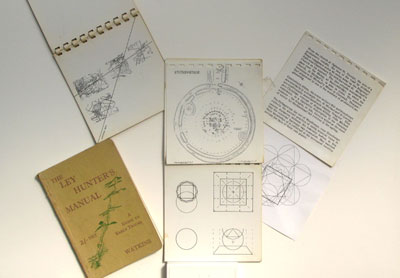