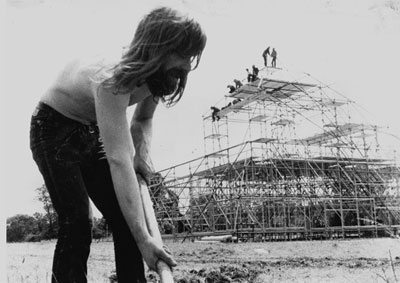 The scaffolding used for the sub-frame and towers was Kwickform, a modular scaffolding system, designed for the ship building industry. Although called Kwickstage it had never been used outside a dry-dock before, a system so good that it has become the rock and roll staging industry system of choice,...... a first for Glastonbury '71.

Come June, I pulled a scratch stage crew together, Roger Heighton, Roger Tuffts, Harry Williamson, Geoff Allison and Worthy Mark to name but a few. Some had to go to work during the week, only able to give their all at the weekends.
The grid work was set out over the spot that Andrew had dowsed 9 months previously, having had a copper rod driven in to the ground which became the earthing point for the structure.

The money for materials was in short supply as it was to be a free gathering, so we relied on the timely generosity of people giving what they could.
Arabella had funded the start of the Pyramid Stage build with additional funds coming from Jeff Dexter and Ian Knight’s 'Implosion' events at the Roundhouse.
The structure nearly did not become the iconic Pyramid Stage of light, because with two weeks to go, we did not have the money for plastic sheeting to waterproof the stage let alone clad the pyramid framework in faceted, bright, expanded metal.

The week before the Solstice, Jean Bradbery went into overdrive, charming the birds from the trees, persuading Isaac Tigrett who was in the throes of opening the first Hard Rock Cafe to come to the rescue, along with Michael Wolff of Wolff Olins.
With their generosity, John Massara was able, pound notes in his hand, to buy the expanded metal needed to clad the Pyramid Stage.

Jim Barton who had appeared that week at Queensgate Terrace, John Coleman's London HQ, joined in,... gofer extraordinaire in his VW bus, finding the unfindable.

THE CLADDING
Next Page view