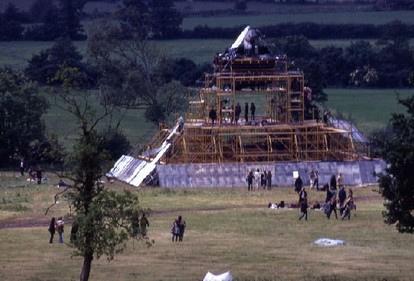 John Massara arrived back on site some days later with 300 sheets of expanded metal.
We already had the makings of an audience looning in front of the stage. Taking advantage of the many willing hands we soon had a greatly enlarged crew passing sheets of expanded metal up the face of the Pyramid. From afar they looked like leaf cutter ants swarming over the framework, moving sheets up and wiring them on, this is why so many of that '71 audience feel that they were part of the creation of the Pyramid Stage. Unfortunately some of the sheets were attached upside down causing dark holes in the surfaces when lit.

The reason the Pyramid Stage was so bright, is that the surface that I specified had over 5 million light reflecting facets over its surface.
I remember having a conversation with Nic Roeg and him saying that it is impossible to make light thicker (this was before coherent laser light got out of the lab and into the hands of the entertainment industry). Nic and the audience were amazed by the brilliance of the reflected light, when seeing the pyramid lit by only 2 Mole-Richardson 10 kW lights. (How is that for Green?) 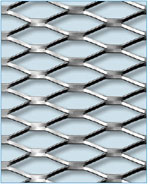 THE BUILD CONTINUES
Next Page view