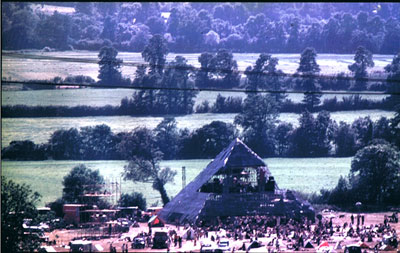 The height of the stage was the result of using Dr. John Dee’s 'Monad' to determine the elevation and set the performance area at the most powerful point. This was unusually high and a little remote for the audience but the up- side to this was that in order to get a good view, the audience had to move back thus removing the need for a security barrier to the front of the stage.

The film crew arrived on site, and Andrew abandoned his hot red phone and well ordered desk overlooking the farm, to show them the site,.... first stop the stage.

The Pyramid had a built in camera platform set below the stage level running the width of the stage.
Nic Roeg, Sy Litvinoff, and film crew including David Puttnam as a young cameraman and Paul Misso, Nic's stills photographer, (bag of cameras over his shoulder) checkout the stage.

Decks are built in under the stage for John Lundsten and Jo Gannon's sound equipment. The stage crew had their own sub-stage platforms built in. All very cosy. 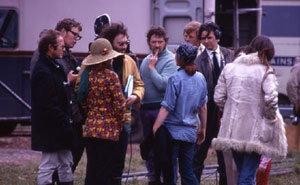