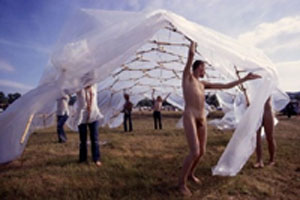 The input from the more radical architecture and design communities in London was outstanding.
Keith Critchlow had not only helped me with the geometry of the Stage but also arrived on site with Julian Carlyon and a number of his students. They brought with them the prefabricated parts for a most unique 8m dome made from laminated cardboard that they erected on the grass in front of the farm house. This became the Release chill out area for lost trippers, regrettably burnt to the ground after the festival.

Mark Fisher and Jonathan Park built a ¼ acre polythene rope tethered inflatable structure, that was home for quite a few who arrived without tents.

From the US via Queensgate Terrace came Dr. Zee Charnoe and Leonard O’Houlaghan arriving on site with arms full of 1” square section 4’ 0” lengths of timber and then began assembling a 6m dome with nothing more than stout string.
Dr. Zee had demonstrated the principal on the farmhouse kitchen table by interlocking the blades of three table knives.

Roger Heighton and Roger Tuffs, two of the stage building crew, erected a black polythene clad star structure on the crown of a small hillock backing on to Muddy Lane.
This Dark Star was subsequently banished from the crown of the hill because Andrew felt the summit was a related power point to the stage.
So move over man!

Hand crafted pyramids, tipis and benders appeared from the hedgerows of the farm and organic communities sprang up, some of which have lasted to this day.

THE STAGE LOAD IN
Next Page view