The Stage Load in

The stage still not finished, John Coleman the stage manager, arrived driving a flock of willing but inexperienced helpers before him.
The first problem was the height of the stage because this called for two builder's lifts to get the bands equipment on and off the stage.
I thought them a good idea at the time!
No one had ever had the need to get band kit on an open-air stage of that height before, John Trucks took up the challenge by firing up the first lift. A brave man. 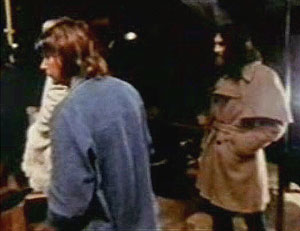 Tony Andrews had been waiting for days to get his new loudspeakers on stage in the high wing areas but everyone else wanted their kit on stage too. Amid the chaos John Coleman was bringing order to some areas only to have them overrun by the arrival of yet more of everything!
Jim Barton and John Trucks try to stem the flow of kit and people at ground level, to take the pressure off the stage.
Lifts and staircase now under control, but how to stop people climbing up the scaffolding to get on stage? 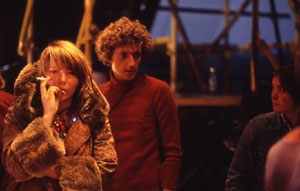 THE FARMHOUSE
Next Page view