Frank turned up on stage, saying that I looked knackered and that a meal would sort me out. There was still a lot to do. He gave me a lift to the farmhouse where we were greeted by a scene from the Great Exodus, only they were all heading stage-wards.

I had a room with a bed and a drawing board in the farmhouse, which opened on to a flight of stone steps to the area in front of the house, when the adjacent kitchen door became jammed with clamouring people my door became the obvious way to get in or at least receive some attention. 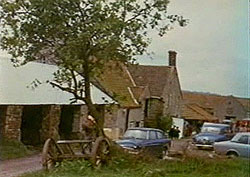 Knock knock,
"Hello I am Kate DeBurke,... I am here to arrange the arrival of Guru Maharahji, where can his helicopter land?
I told her that we had no facilities for people to arrive that way. "He is very welcome to come but he will have to arrive like everyone else."

Days later it had rained and the Guru arrived in a flower strewn limo, no 4 wheel drive, just acolytes to push. He alighted, his black patent leather boots getting a true Worthy Farm blessing. So much for predicting the future.

I tried to get a cup of tea in the kitchen and failed, Thomas Crimble was doing a great job trying to keep the pressure off Andrew, allowing him to deal with a constant flow of complaints from Pilton residents, lost bands etc. Andrew's red phone being the only conduit to the world outside. Andrews previous job as Randolph Churchill's literary assistant prepared him well for the task in hand.
I thanked Frank and he set off to the fields in Andrew's Austin gypsy 4x4 to try and plug the holes in our still leaking infrastructure. 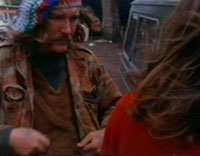 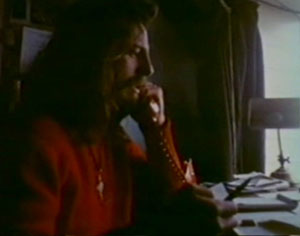